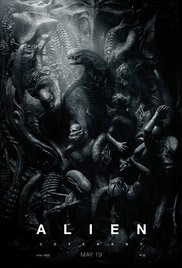 Alien covenant continues the story 10 years after the Prometheus (2012) Ridley Scott movie. The crew of a colony ship are on a 7 year trip to colonise a far away planet when they intercept a message that's coming from a planet in a system that happens to be only weeks away. This newly discovered planet at first glance seems to be a better option than their long travel destination to the planet that they had spent a decade calculating to be the best and nearest livable place to make their new home. Once they land they come to realise this was the home planet of the engineers who were the ones that created humans. This movie spends too much time on the story to tie in with all the other alien movies and not enough time with the suspense that makes the sequels a success. A planet that has been dominated by modified aliens doesn't explain how easy a civilisation of engineers can be taken over without any real fight. This was a movie that was a good add on to a successful franchise but it does not stand out to be one of the better parts. Watch if your a fan but if you had to choose stick with the original hit.