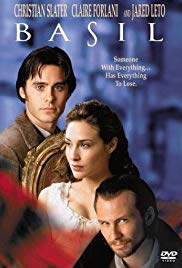 Basil the son of an aristocrat grows up trying to live up to the high standard that his father expects of him but always seems to fall short. His mother who is his only support emotionally is gravely ill and can not be with him at his time of need. His brother falls in love with someone that his father doesn't approve of and is banished from their home which leaves him to be raised by a father who doesn't know how to show him a fathers love. Basil (Jared Leto) bumps into a John Mannion (Christian Slater) who beomes the friend that he was never aloud to have and then while meeting with his new found friend he meets Julia Sherwin (Claire Forlani) who he madly falls in love with and asks for her hand in marriage to show her that he only has eyes for her. This is where the story starts to show us a that their fates were already decided long ago when Basil was still a young naive boy. An entertaining movie that has you experiencing what life would of been like in the 19th century where class is so prominent. A watch or play two thumbs up.