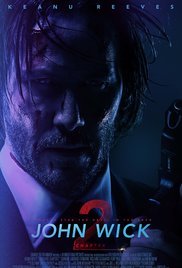 John Wick 2 has twice the action as part 1 which seems impossible considering the non stop action in part one. This movie shows that even in retirement you cant escape from your life's mistakes. John Wick discovers that a large bounty has been put on his life after he was forced get back to his line of work which he has been desperately trying to leave in his past. So much action is squeezed in this movie with the amount of deaths that may have trumped the first movie, so watch or play recommends the movie that has created a potential line up of fans to follow the John Wick franchise on his next journey.