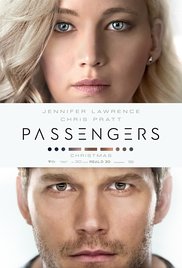 If you can ignore the possibilities of a meteor shower that happens to only damage the part of the spacecraft that awakens only one person who happens to be an engineer out of his cryosleep , then you will enjoy the rest of the movie. The spacecraft travelling  a 100 year journey to a get to a distant colony planet and transporting thousands of people has a malfunction and Chris Pratt wakes up 90 years early which leads to the interesting question what would you do surrounded by thousands of people sleeping knowing that you will die alone before the end of the journey. Slowing going insane he bumps into the sleeping beauty Jennifer Lawrence, and that's where the sparks fly for him only but once he wakes her up she soon follows suit until she finds out that he was the cause of her waking up early. The story has a few twists that keep you interested enough to give this movie a thumbs up for entertaining enough to watch.