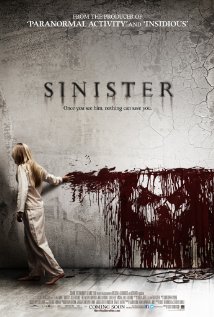 Sinister's main stand out was it's interesting story which stars Ethan Hawke who plays Ellison Oswalt a writer who's speciality was unresolved gruesome murders, which points towards a serial killer. Ellison Oswalt follows the bread crumbs that seems to show links between the most recent murders and older murders during the 1960s. One of the failings in the movie its inability to show detail on how the killer chose his victims and what he was. The story needs to be explained in depth if it chooses to make profound statements. A lot of time was spent in the house trying to spook the viewers with loud noises and pop up horror antics rather than scaring them with an immersive storyline. This movie had the potential to tie in real murder events with unexplained demonic possessions creating a real scary relationship between what we watch on TV and the world we live in. Watch it if you think the review might be wrong, or just agree on the review with comments below. This movie could of been good but the only good it had was filled in on the trailer, a disappointment to a horror fan.