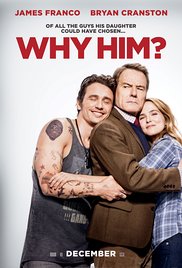 Why Him tells the story of a father who has just discovered his only daughter is dating a guy that he doesn't approve of. Ned Fleming (Brian Cranston) believes that his daughter's new boyfriend is far from what he wants for her her and soon discovers that her boyfriend wants to propose to her once he has his blessing which leads you to funny moments throughout the movie where Laird Mahew (James Franco) would do anything to get the approval of his wannabe father in law.This is a must see movie for anyone who wants to laugh at the outrageous things done in the name of love. A watch or play highly recommended movie.