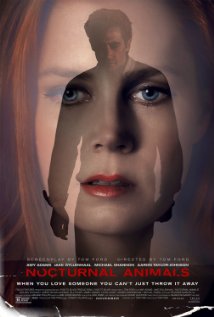 Nocturnal animals has a promising trailer which manages to squeeze in all the interesting scenes from the movie making you believe that this drama thriller, will keep you guessing all the way through the movie. It all begins when an art gallery owner (Amy Adams) is surprised by her ex-husbands intentions (Jake Gyllenhaal) because of a violent novel he wrote and dedicated it to her. She is convinced that her ex-husband is trying to let her know that he has plans for her because of the betrayal that he was forced to experience. This movie was made in three parts, the first was based in the present, the second was the past which explained a little about how the characters split and the third which filled most of the movie focused on the book titled NOCTURNAL Animals which most of the exciting parts of the movie were shown. The movie was based on a book and should of remained just a book when watching it through to the end you discover that all the parts of the movie lead to a disappointing end which did not seem to make sense. She was trying to rekindle her old flame even though the book dedicated to her which she showed concerns with because it was a violent book dedicated to her.....? Watch the trailer and you will have seen the best parts of the movie.