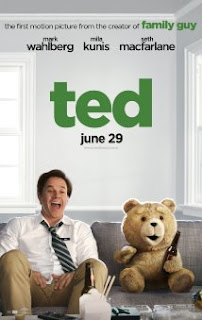 Ted is a movie that may rely on it's corny story to grab its audience attention and is successful in certain parts. It has the courage to make fun of its own story so that way any joke that doesn't reach the audience can be claimed as intentional mocking and not really trying to be funny. The stupid and funny parts of the movie seemed to coincide, you were never so lost in the humour that it would force you to laugh uncontrollably. Getting Seth MacFarlane to bring out Peter Griffin jokes seemed to make you think of the Family Guy and start forgetting Ted. The success of family guy overshadowed this movie which in turn gave you the same sort of expectations that you would expect when watching any other Seth MacFarlene's masterpiece. This was an entertaining movie in parts. The cameos are enough for you to watch the movie but not enough for you to love the movie, even though just the site of Ted could make you laugh.