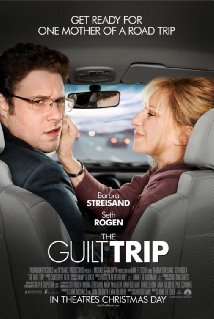 A movie where a nagging mother gets invited by her son to go on a work road trip which he has an ulterior motive to reunite his mother with her first love. Barbra Streisand does a remarkable job playing a nagging mother and Seth Rogen does a fine job playing a son that tries to control his frustrations with his mums overpowering influences. Their performances were the only highlights in the movie because a road trip with your nagging mother is more annoying than funny. Guilt Trip was classified as a comedy, but for anyone who has a nagging mother it should of being classified as a horror with true elements. This movie carried comedy limitation because their is a line where you do not want to cross with a movie about a mother and a son on a road trip. The very few funny scenes wouldn't be enough for someone to want to watch this flick, unless your a fan of the stars and have to commit yourself in watching all their movies, then brace yourself for a boring movie.